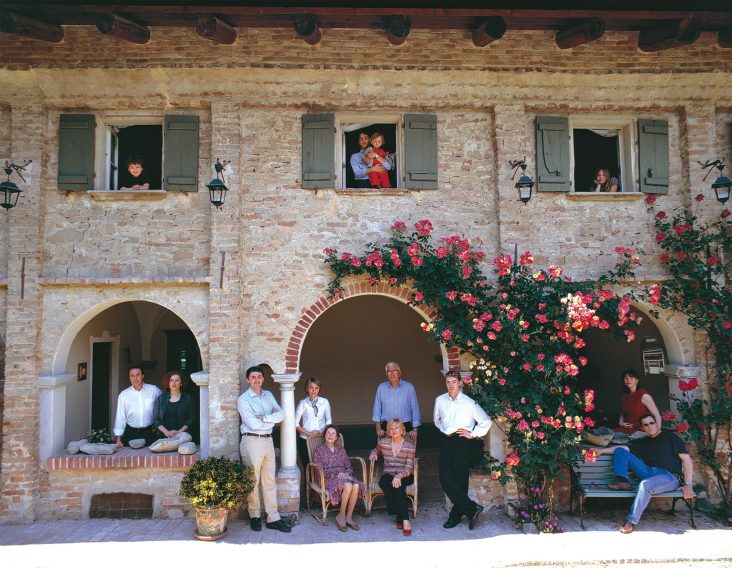 The Currados have three children, Emanuela, Elisabetta and Luca.

In 1970 Alfredo and Luciana, through their friendship and support to some local artists, started to update their wine labels. They mention that in one long winter evening in Langa a group of artists, eating and drinking together with them at the table, suggested to “dress their art-work in the winery” with “an art-work on the label”.

The late Alfredo Currado loved to tell the story about how his Barbera wound up in the Scarrone Vineyard back in 1964. Scarrone, one of Barolo’s most venerated vineyards, consists of a long slope that runs down from the castle walls of Castiglione Falletto. It’s arguably some of the most prized land in all of Barolo for the Nebbiolo grape. The land was great, Currado said, but the damned castle, not so much. Every afternoon, you see, the castle would cast a shadow over the most important part of the vineyard and shade the grapes which, back in the days before climate change, needed every second of sunshine they could get in order to ripen. So, short of tearing down the medieval castle in his front yard whose walls were actually part of his cellar, Alfredo had no alternative to replace his much more valuable Nebbiolo with early-ripening, reliable ol’ Barbera. But what Barbera it became! In such a privileged position, it ripened gloriously every year and made a wine that quickly outclassed what most of his colleagues were producing. Barbera soon became one of Vietti’s calling cards. Alfredo passed the torch on to son Luca and Luca’s wife Elena and Vietti went on to become one of the most iconic names in the entire region. With the change in the weather over the subsequent years, Luca could have easily replanted that Barbera to Nebbiolo and made a wine that could sell for hundreds a bottle, but, in honor of that damned castle and his father’s prescient sacrifice, Luca stubbornly continues to make the two cuvees of Barbera Scarrone like his father before him. And it’s still a magnificent Barbera that continues to define what’s possible with this oft-overlooked variety.

‘Un vino dal nerbo viperino, floreale e fresco’ wrote Luigi Veronelli of Alfredo Currado’s first 1000-bottle production of Vietti Arneis in 1967. And now, 50 vintages later, as we open the newly arrived 2016, our tasting notes are remarkably similar…..the Vietti Arneis is, as it has always been, a wine of great ‘freshness, florality and finesse with a little bite.’ Currado is, of course, credited with rescuing this ‘rascally’ white from total obscurity and eventual extinction by recognizing its potential to make a lively, delicious dry white and bottling it as such. Currado’s colleagues in the Roero saw its success and followed suit. And the rest, as they say, is history, as the word ‘Arneis’ has become virtually synonymous with ‘Piemontese white wine.’ We at PRIMA love it too and have successfully installed our favorite Arneises as better alternatives to the tyranny of the ubiquitous Pinot Grigio when one is looking for something on the lighter side of life but with character too.