a) …..is a full bodied red wine with firm tannins. 100% comprised of one of three traditional clones of Nebbiolo grape.

b) ….Italian wine laws state that Barolo must be aged a minimum of 38 months from the November after harvest, 18 months of which must be in wood.

…11 towns, villages and hamlets kept in the lee of the Alps to the north and west by the hill of La Morra

…An ocean bottom! The limestone marls, sandstones and clay that comprise these hills are still strewn with fossils.

…Segregated into some 166 official ‘crus,’ or named vineyards, that fall into the major zones of La Morra, Castiglione Falletto, Serralunga d’Alba, Barolo and Monforte d’Alba. These towns are in and among two major valleys- Barolo and Serralunga. Each zone has a particular soil type (or a heterogeneous mix), altitude and exposure that make it unique.

…The next ring on the dartboard includes the subzones of Verduno, Novello, Annunziata, Diano d’Alba, Roddino and Grinzane Cavour that are under the sway of the major zones but still have their own character.

…Not Barbaresco. That town is only six or seven miles northeast from Barolo on the other side of the small city of Alba. That appellation is comprised of three separate towns- Treiso, Neive and Barbaresco. The chief difference between Barolo and Barbaresco lies in the fact that Barbaresco isn’t protected by the La Morra slope from the Alps’ winds and is a cooler zone producing markedly more elegant ‘feminine’ wines. Its aging requirement is actually one year shorter.

…Is not Roero either. That’s on the other side of the Tanaro river and is flatter and warmer and is better known for the white Arneis grape, but the quality of its Nebbiolo-based Roero DOCG wines is increasing rapidly.

…Each cru (since 2010) has an ‘official’ name and must appear on the label that way. This new regulation formalized what was traditionally a very haphazard way of labeling by single vineyard.

…Traditionally farmed by vineyard owners who may have small parcels in many crus spread out over many communes. Historically many of these families were sharecroppers who farmed for one of several large cantinas that dominated the business. It was a younger generation that began bottling their own ‘domaine’ wine.

…Traditionally bottled as a blend often called Barolo Classico. The single-vineyard Barolo is a relatively new phenomenon and many producers bottle both a Classico and several single-vineyard wines.

The entire region of Barolo received its DOCG status in 1980 along with Vino Nobile di Montepulciano and Brunello di Montalcino.

The highly publicized break between Barolo producers, the so-called ‘traditionalists’ and ‘modernists’, is mostly myth. While it is true that a ‘modern school’ using roto-fermenters, short macerations and small oak developed in the late nineteen eighties, most winemakers produce Barolo using a rather narrow spectrum of methods and many of the most modern of the modernists have come back to the pack, while many of the staunch traditionalists have, in turn, learned a lot themselves from these experimentalists.

…Increasingly made by women winemakers! This trend, while upsetting to a generation of men who rue their lack of male heirs, has created a positive sea change in the culture of the region.

Declassified Barolo, i.e. young vines or from vineyards that do not meet Barolo criteria can be bottled as Nebbiolo delle Langhe or Nebbiolo d’Alba.

…Far more drinkable when young than it used to be. This has to do not only with better winemaking but also climate change. Nebbiolo is now harvested under far better conditions and a lot riper than in decades past making for a wine that, with decanting, drinks well when young but can also age. The common aroma of Nebbiolo is that of tar and roses. Conventional wisdom states that bottle of Barolo tastes best at 10 years of age from the vintage.

The villages of Barolo: 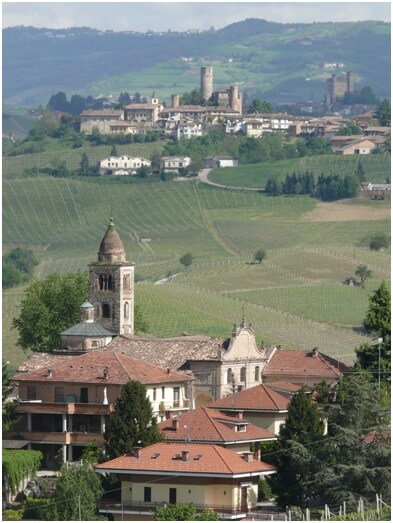 A 440 mm lens-eye view over the hamlet of Annunziata in La Morra to Castiglione Falletto with Serralunga in the background.